What We Know: Petition to overturn the election, 3.9 million signatures

This time, I’m posting mostly opinions, but here are the key facts I’ll be commenting on:

On Change.org there is a petition out to overturn the election in what would be Clinton’s favor.  It’s been signed by over 3.9 million people at the time of this posting:

Many Americans have long argued that the Electoral College is a broken system.  Many have called for reforms or its abolishment.  Reform isn’t a crazy idea.

Hillary Clinton did win the popular vote, and many are saying that in a democracy this should be enough to make her president.  At first blush, this too seems quite rational.

I voted for neither major party candidate.  So, why would I oppose flipping the vote?

I am against so-called “faithless electors” voting contrary to how they were bound in the election.

To me, this is at best a dereliction of duty by electors to represent the people and the states.  Furthermore, I believe we would see serious (hopefully unintended) consequences.

Yes, Hillary Clinton would be president. Then the other half of the country would feel that the rules and laws everyone thought they were playing by had been trampled.

If you think there’s anger today, imagine the level of anger we would see from tens of millions of people who would then feel betrayed.

The very foundations of the Constitution and our government as a whole would be called into question, and respect for law and order would devolve.

We need to keep the peace, and we need to work on ways to improve our institutions of government.

We are already seeing some glimmers of hope that Donald Trump understands compromise and will work toward it.  All presidents break campaign promises.  Meanwhile, let’s not forget that the Republican party, while in power, is far from unified.

I do believe at this juncture that America’s system of checks and balances can and will survive almost any of Trump’s detractors worst-case scenarios.

That’s precisely why we need to maintain the integrity of our government.  The Electoral College, for better or worse, is part of that foundation today.

Let’s preserve as much of the integrity of our system as we can to protect all of us.

Is the Electoral College Totally Wrong?

I do support some aspects of the Electoral College that favor concepts like states rights.  The more local control we have, in many ways the more free people are.  Your vote “counts more” when more power is at state or local level.  How many decisions do you want made by someone across the country?

To maintain this sort of state and local autonomy, each state no matter how small needs to have a certain voice and power.

Our Founding Fathers were not perfect people.  Yes, some did own slaves.  The rights of native peoples were utterly trampled.  They were probably pretty hypocritical at times.  But … they also gave us a system that’s worked pretty well the last couple of centuries.  They did more good than harm for our nation as it is today.

So, let’s give the tried and true ideas the respect they deserve.  I think a read of things like The Federalist Papers (I read them in highschool) would remind us how much effort they put into finding the right balances.

Respect the rights of the majority AND the minority.  We should always strive to evolve systems to do that better.

From Austin, Texas, I bid you peace.

Yes, I got it wrong.

While there’s no such thing as absolute certainty, I now believe that the busses that I photographed on Wednesday, November 9, were for the Tableau Conference 2016 and had no relation to the ongoing protests against President Elect Trump.

This information was provided to me from multiple professional journalists, and I do still have some faith in humanity.  🙂 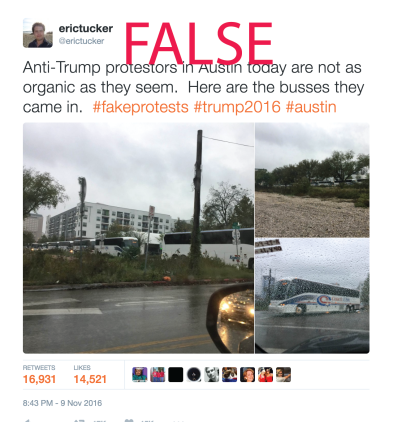 I remain with a skeptical eye on just how much manipulation has occurred behind the scenes of many political events, but I do believe that these specific busses were used for a technology conference — nothing more.

I don’t know that Donald Trump was talking about me (posted 24 hours after my post), but he’s among many with doubts:

Just had a very open and successful presidential election. Now professional protesters, incited by the media, are protesting. Very unfair!

I initially believed it was in the best interest of everyone to keep the Tweet live while augmenting the story.  I will indeed post a screenshot for posterity.

As I have said before, I value the truth.  I will remove the Tweet so more people can have a higher proportion of truth in their lives.  I also want us all to refrain from repeating information that is likely untrue so that we can have greater credibility when our evidence is stronger.  (Less “boy who cried wolf”)

Let’s not be afraid to say things when we aren’t completely sure, but let’s provide the right qualifiers and probabilities when we can.

Rapid discourse won’t always be fact-checked.  If it had to be, much of it simply wouldn’t occur.  That could be as bad as occasionally getting it wrong.  It’s not journalism, and it’s not to be held to the same bar.  (But this only works when everyone understands the “bar” is lower and exercises skepticism — another longer conversation for another time.)

I appreciate the conversations I’ve had with many in the “Twitterverse”.

I have tried to be magnanimous to many including those who disagree with me.  I value our ability to discuss with each other in a civil and respectful tone regardless of where our views may stand.  I’ve seen a good amount of that in these past few days, and I’d love to see more.

An Apology and a Promise

I would like to express my sincere apologies to anyone who feels misled.  I can assure you my intentions have always been for the best.  Now that I know just how wide these things can go so quickly, I’ll be more careful to give you the right information should there be a next time.

I am not a professional blogger nor a professional journalist. I do hope to find more ways to make a difference.  Being involved in political discourse is vital to democracy.

On Wednesday a few minutes after 5pm, upon leaving a meeting near downtown Austin, I chanced on a large group of busses parked just east of the I-35 on 5th Street.  I snapped a few pictures and was on my way.

Later that day, I noticed news reports of protests in downtown and near the University of Texas campus.  Having dealt with closed streets and unusual traffic patterns that day toward the south of the downtown (below 8th street) and having seen some pictures of protests that looked more like the south end of downtown than near the capitol, I presumed the busses had something to do with the protests.

The response was massive (about 15,000 retweets in the first 36 hours), and even the local news commented:

Fox 7 News: Protests across US and Austin accused of being fake by some on social media

And for a fleeting moment the front page of Reddit I’m told as well:

Was I flat wrong?  Perhaps!

It turns out Tableau was having a massive conference having nothing to do with politics less than a mile away.  Could these have been busses for Tableau’s shenanigans?  I hope they don’t mind me linking to the schedule from that same day:

And so, I posted this:

I strongly value the truth. There's a pretty good case those busses were for a conference by @tableau. @fox7austin https://t.co/dHxRg8GNZJ

Does Anyone Care if I was right or wrong?  Sadly, not enough.

In the 3 hours since posted, my alternative (and possibly true) view of reality has garnered a whopping 8 retweets and 11 likes.

What’s going on?  The systems that carry information to us all are filtered by what’s sensational — not by what’s true.

To be cynical for a minute, people are surprisingly uninterested in truth but very interested in what helps them to make their own case.  This is probably human nature, but is it healthy?  Is that really the basis and process by which we want to make big decisions about our future based upon?

A Few Words from the Middle of the Road

First of all, I voted for Gary Johnson.  I’m neither a supporter of Trump or Hillary, but I did consider voting for both of them for different reasons.

I’m secular independent who leans Republican.  I often describe my political views as “little ‘l’ libertarian with a heart.”

A few of my key political positions:

As you can see, I don’t fully align with any candidate.  Let’s promote new voices so that we can have the dialog necessary to reach real and lasting solutions.

I want to set an example.  I can be wrong, and I can admit it when I am.  I will strive for the truth, and I ask you to do the same.

Let’s respect and defend the rights that make America … America!  Let’s respect each other, and let’s give each side a chance to be heard.

Whether we like what’s going on in the streets today or not, remember those people have a voice.  I do not want to live in an America where people cannot make their views heard.

I ask everyone to do their best to tone down some of the anger and find compromises if not collaborations that can move us toward a better America.